What Will Happen To My Pets During A Divorce?

Home » What Will Happen To My Pets During A Divorce?

What Will Happen To My Pets During A Divorce? 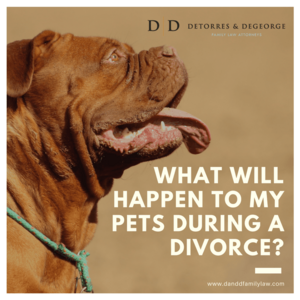 Many people who are going through a divorce in New Jersey are surprised to learn that the courts treat animals as personal property to be distributed, rather than viewing it more like a custody issue with children. Of course, as an animal cannot be divided in the same manner as bank accounts or other property, there are some considerations that should be made, including the pet’s well being. This may result in a judge determining that one party receives the animal, while the other may receive some amount of money for his or her “interest” in the pet. As any animal lover knows, money will not replace a beloved pet.

If you are wondering how to get custody of a dog in divorce, one important thing to keep in mind is that it is always best if you can reach an agreement on the issue with your significant other. When you make your own agreement, you can be more creative with the solution whether by providing that the dog will travel between houses with the children, or perhaps the person who does not have the dog the majority of the time will take the dog when the other party goes on vacation. Deciding on the custody and timesharing of your pet in a divorce settlement will allow you to fashion whatever arrangement works best for you and your ex.

If you are unable to reach an agreement about custody of the dog after a breakup, a judge will have to make a determination about which party the dog should continue to live with. A judge will likely not order any type of support, or “petimony”, to share the expense associated with the animal. As the New Jersey court views the pet as an asset, he or she will decide who the animal should live with and that person will most likely be solely responsible for all costs of the pet’s care.

In the event that you are currently going through a divorce, you can get a pet without fear that your ex will take the animal from you. As is the case with money and other property, once a complaint for divorce has been filed all property obtained remains that party’s separate possession. Therefore, if you have filed for divorce and then purchase a new pet, your spouse will have no claim to the animal.

In the past year, there has been reason to believe that the overall attitude towards pets as property is shifting. Effective January 2017, the State of Alaska requires that judges view animals as separate from regular personal property. The Alaskan judges must consider the well being of the animal in making a determination about which party should receive the animal. The court also has the ability to award joint custody of the animal to the parties. How exactly this will play out remains to be seen; regardless, New Jersey has not yet taken this step.

If you are concerned about the custody of your cat or dog following a divorce, schedule a consultation with the attorneys at DeTorres & DeGeorge at 908-284-6005. We have extensive experience with all issues of family law and divorce, including the custody and care of the furry members of your family.