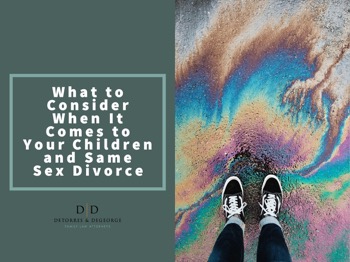 When the Act was first signed, it gave same-sex couples many – but not all – of the same legal and financial rights as heterosexual couples. Then, in 2006, civil unions were approved and parties who joined in civil unions were afforded the same rights and benefits that heterosexual couples receive when entering into a civil marriage. Finally, on October 21, 2013, same sex marriages were authorized, and since that time, along with the expansion of rights to marriage, the law has also had to grow to protect the children borne to the same-sex couples in these relationships.

In New Jersey, there are some protections in place for same-sex couples and their children – one of which was highlighted in 2005 when a same-sex couple had petitioned the state to permit them to include not only the name of the birth mother on their child’s birth certificate but also the name of the mother’s domestic partner. Utilizing the Artificial Insemination Statute, the Court ruled in the favor of the partners, thereby confirming the child’s relationship to the non-biological parent who consents to a spouse’s artificial insemination.

While this law has existed in New Jersey for quite some time, it is specific to the state, meaning that not everyone in the U.S. enjoys this same right. If the parties in this example were to move to another state that did not recognize same-sex couples named on a birth certificate, only the birth mother may be recognized as the legal parent. After all, a birth certificate is a state document – it does not confer parentage. Although states are not bound by the laws of other states, they are bound to abide by court orders from other states. Therefore, if the non-birthing mother legally adopted the child, even a state that does not acknowledge the parental rights of same-sex couples on a birth certificate would be required to acknowledge the secondary parent’s legal rights.

The law continues to evolve, and in 2017 the United States Supreme Court ruled that it was unconstitutional to deny married same-sex parents the right to both be named on a child’s birth certificate, acknowledging that all married couples have the same “rights, benefits, and responsibilities” to their children, including on birth and death certificates. Therefore, the parties in a married same-sex couple can both be listed on the birth certificate of a child born during their marriage. However, it is still recommended that the parties apply to have the non-biological parent adopt the minor child to ensure that the relationship is reduced to a court order, which would be given full faith and credit in other states in the event that the parties relocated at some point in the future.

The attorneys of DeTorres & DeGeorge are always staying apprised of new and developing laws so that we can best handle your family matters. Schedule a consultation with one of our attorneys today to discuss your unique set of circumstances.