Who Gets Child Custody During a Legal Separation?

Home » Who Gets Child Custody During a Legal Separation?

Who Gets Child Custody During a Legal Separation? 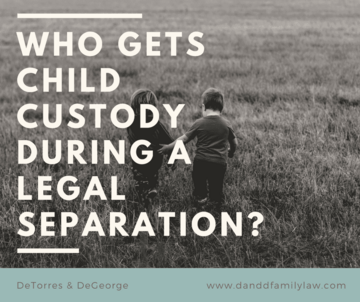 While the issues of division of assets and calculation of child support may seem fairly cut-and-dried in legal separation and child-custody cases in New Jersey, deciding who gets the child in a separation isn’t as straightforward. New Jersey does not have legal separation in the same manner as some other states. However, if you and your spouse no longer wish to live together, but are not prepared to proceed with a divorce, you can certainly live separately. In fact, you can even resolve issues of child custody, child support, and spousal support by filing a non-dissolution, or “FD” case. However, the underlying law with regard to child custody remains the same for both a divorce and FD case.

When dealing with a child-custody matter, you need to determine two types of custody: legal and physical. Legal custody deals with who is entitled to make major decisions in your child’s life. These decisions include the child’s health, education, and religion. In most cases, the parties decide to share joint legal custody of the children, which means that both parties are entitled to participate in the decision-making process for the major events in their children’s lives. It is less common for parties to agree to, or for a judge to order, sole legal custody. In this scenario, only one parent is permitted to make the major decisions for the child.

Physical custody of the child is often the more difficult aspect of a custody dispute to resolve. Many years ago, the courts subscribed to the tender years theory, which essentially stated that children were better off with their mothers. The New Jersey courts have not utilized this theory in many years and instead evaluate the best interest of the child when reaching a determination in a custody case. This will include the consideration of a number of factors, such as the parties’ ability to work together, the needs of the child, the opinion of the child if they are of a suitable age, and the stability of the home environment with each parent.

Recently the trend has been away from the old standard of alternating weekends and one dinner visit per week for dads. More and more couples who are going through a divorce are agreeing to a shared-parenting arrangement, which can consist of any arrangement up to and including a 50/50 schedule. Parents are regarded as being on equal footing with regard to parenting time and neither is considered more suited to having primary physical custody based on gender alone.

Which type of custody is best for your family?

As for reaching an agreement with regard to physical custody—and what’s best for your children—this may be a more complicated arrangement but can be custom-created for every family situation. Physical custody can take on many forms, including the old “traditional” parenting-time arrangement of alternating weekends from Friday to Sunday. Recently, however, there has been a trend toward parties agreeing to share joint physical custody. A true “joint physical” custody arrangement is when the parties share the children on a 50/50 basis. This can be done either by having a week-on/week-off arrangement or by coming up with a more creative schedule that accomplishes that goal and works with everyone’s schedules. Every family is different, and you and your spouse are in the best position to determine what arrangement will work best for your family when deciding who gets the child in a separation.

Resolving without court intervention
The courts encourage parties to resolve their legal separation and child-custody matters without court intervention. Parents who are going through a divorce are often sent to custody and parenting-time mediation with court staff in order to assist in reaching a resolution that the parties agree on. This is a program that is intended to give litigants a free opportunity to resolve the custody and parenting-time issues early on in the case. You and your spouse can agree at any point during your divorce process that you have reached a resolution of your custody and parenting-time issues, and then enter into an order that describes exactly what your agreement might be.

In some instances, the parties may need to undergo a custody evaluation with a professional who will render an opinion as to what parenting-time schedule they believe will be in the child’s best interest and who gets the child in a separation. This expert report can be utilized at the time of trial, in the event that you are unable to resolve your matter.

In the event that you cannot reach an agreement regarding legal separation and child custody, the issue will go to trial. The judge hearing the trial will hear testimony from each party as to why that person’s custody proposal should be ordered. If the parties have also retained expert witnesses, they may testify as well.

How do you file for child custody?
If you are married and are seeking a divorce, you need to file a complaint for divorce and specifically include what type of custody you are seeking, such as joint legal and primary physical custody. If you and the other parent were never married or if you are married but are not pursuing a divorce, you need to file a “FD” complaint and make the same request in order to determine who gets the child in a separation.

If you have questions about legal separation and child-custody issues, schedule a consultation with one of our attorneys at DeTorres & DeGeorge today. Our attorneys can assist in your custody case through either litigation or mediation, as they have done for many others in this situation.