When Federal and State Laws Collide: Divorce and The Impact of Disability on a Military Pension

Home » When Federal and State Laws Collide: Divorce and The Impact of Disability on a Military Pension

When Federal and State Laws Collide: Divorce and The Impact of Disability on a Military Pension 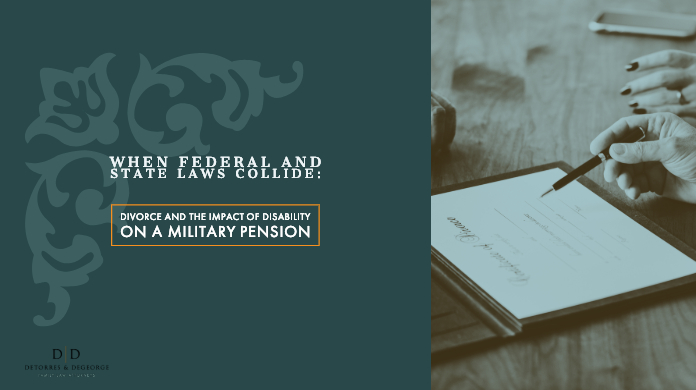 There are many types of retirement assets, such as 401(k)s, IRAs, 403(b) plans, and pensions. Although many private companies have done away with pension plans, some still continue to maintain this option for their employees; and if someone works for the government, police and/or fire department, is an educator, or is in the military, it is likely that there will be a pension that needs to be divided in equitable distribution.

In many instances, the marital portion of a pension – meaning the benefits that accrued between the date of marriage through the date of the filing of the complaint for divorce – is shared equally by the parties. However, there are often special rules that govern each pension plan. For example, the Police and Firemen’s Retirement System in New Jersey does not provide for a survivorship option, meaning that a former spouse may never receive his or her benefit if the enrolled spouse dies before they are eligible to claim the pension. Additionally, military pensions require that the enrolled spouse be involved in the military for 10 years and be married to their spouse for 10 years before the military will divide the military pension in favor of the former spouse. If this “10/10” rule is not met, it is up to the military spouse to pay the former spouse his or her share of the pension monthly once it is in payment status.

In some instances, Federal and State laws may be in opposition to one another, complicating how a divorce and the division of marital assets might progress. This is what took place in the recent NJ Appellate Court case of Fattore v. Fattore. In this case, Mr. Fattore served in the military during the parties’ marriage and for a number of years following the divorce. As a result of his service, he accrued a military pension. At the time of the parties’ divorce, the parties agreed that Ms. Fattore would receive 50% of the military pension that accrued during the parties’ marriage. A few years after the divorce, Mr. Fattore became disabled and was unable to continue to serve in the military. He elected to receive a disability pension instead of his regular pension, which would be tax-free. When the Plaintiff attempted to receive her share of the pension, she was advised that she was unable to do so because a portion of the benefit was based on disability. Plaintiff filed a motion to enforce the parties’ Settlement Agreement and, alternatively, to receive alimony in lieu of the equitable distribution that had been promised to her. The trial court ordered that a pension appraiser determine the value of Ms. Fattore’s interest in her ex-husband’s pension at the time the parties divorced and ordered Mr. Fattore to pay his former spouse $1,800 per month until the evaluation was completed.

Following the trial court decision, the United States Supreme Court addressed the issue of disability portions of military pensions in the matter of Howell v. Howell. In Howell, Ms. Howell was receiving her shares of her ex-husband’s military retirement in accordance with their divorce agreement. However, Mr. Howell became disabled years later and received disability benefits that reduced the amount of retirement pay his ex-wife received. The Court in Howell determined that it was inappropriate for state courts to give a former spouse another asset in order to “make them whole” in the event that disability payments reduced the amount of the retirement pension. The Federal government had intended to protect disability benefits from disposable retirement pay, and therefore a party’s interest in a military pension was “not a vested right, but rather, a contingent benefit…” (Fattore v. Fattore, page 11).

The Howell decision changed how the New Jersey Courts viewed Mr. Fattore’s pension. The NJ Appellate Court determined that the trial court’s attempt to make Ms. Fattore whole by ordering a pension evaluation and payment of $1,800 per month was an inappropriate attempt to circumvent the Federal law. However, the Appellate court was satisfied that this change in circumstance – specifically a pension that the parties relied on being divided at the time of Mr. Fattore’s retirement no longer being subject to division – may be sufficient to overcome the parties’ prior waiver of alimony at the time of their divorce. The Appellate court did not offer an opinion as to an appropriate resolution of how to deal with this change in circumstance but sent the case back to the trial court for determination.

If you have a question about pensions or retirement assets and the equitable distribution of these assets, contact the attorneys of DeTorres and DeGeorge to schedule a consultation.