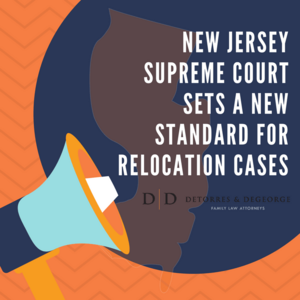 The New Jersey Supreme Court issued a decision last week making it more difficult for a parent to relocate out of the state with a minor child.  Under the prior case law, Baures v. Lewis, a custodial parent who wished to relocate with the child had to demonstrate that there was good cause for the move and that the move would not inimical, meaning adverse, to the child’s interest. Baures v. Lewis, 167 N.J. 91 (2001). Under the new law, Bisbing, in relocation applications where the parents share joint legal custody the standard is now whether the move is in the best interest of the children.  Bisbing v. Bisbing, N.J. (2017) (slip op. at 35).

New Jersey’s custody statute has always provided that custody determinations should be made in the best interest of the children.  However, when Baures was decided in 2001, the Court based its decision partly on the research of social scientists.  At the time, the reports of these scientists indicated that what is best for the custodial parent is what is best for the child.  The Court also based its decision on a nationwide trend of easing the burden placed on a custodial parent who seeks to relocate.

As a whole, the courts do not easily modify established case law.  However, as times and circumstances change, it may become necessary to re-evaluate the law in order to determine if a modification may be appropriate.  In order to do so, the court must find that there is “special justification” for the change.   In the Bisbing matter, the Court determined that the court in Baures did not act inappropriately by taking cues from other courts around the country or being guided by the research of social scientists.  However, as continuing research has revealed, social scientists have not reached a consensus on this issue.  As was the case at the time of the Baures decision, the Bisbing Court also looked to nationwide trends to see what other states are doing with regard to relocation.  What they discovered is that the majority of the states apply a best interest standard in evaluating these cases.

The effect of the Bisbing matter on relocation cases in New Jersey is important.  So long as the parties share joint legal custody of the children, it is clear that they will be evaluated under the best interest standard going forward.  This places the parties on more equal footing, without the custodial parent having an upper hand simply due to that designation.

The process for a relocation application will generally remain the same as under the prior case law.  A party seeking to relocate with need to file an application with the Court and set forth the reasons for the relocation.  If there is opposition to the proposed relocation, the Court will likely schedule a trial on the issue.   Under the Baures standard, many parties seeking to relocate would not employ an expert as they had a lower burden to prove that the relocation would not be adverse to the child.  However, under the new law it is likely that a party may want to retain an expert, or perhaps utilize a joint expert with the other parent, in order to evaluate the best interest of the child.  The reason for this may be two-fold; first, it will allow the parties to present additional testimony to the Court with regard to the effect the move may have on the child rather than simply the emotional responses of the parents.  Second, it may also have the effect of leading to settlement instead of trial.  If the expert report recommends that the child be permitted to relocate, or vice versa, the parties may wish to enter into a Consent Order setting forth a new parenting time schedule rather than incur the expense of a trial.

If you or your spouse is seeking to relocate with your child outside of the State of New Jersey, call the attorneys at DeTorres and DeGeorge to schedule a consultation at 908-284-6005.

HOW DOES GETTING MARRIED AFFECT CHILD SUPPORT

AM I MARRIED TO A NARCISSIST?