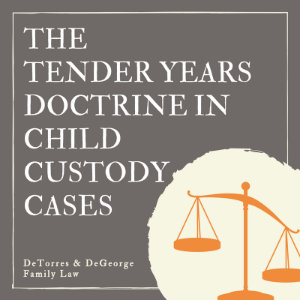 You may have heard of the phrase “the tender years doctrine”. This has to do with custody cases. The tender years doctrine was an approach to custody cases in which courts held that a young child (usually under age 7) was best raised by his or her mother, unless an obvious issue made the mother unfit. The idea was that young children are so fragile and need careful parenting, which could only be provided by a mother who was seen as the most nurturing and sensitive parent.  For many years, courts simply routinely gave custody to mothers without much discussion or investigation. The result of this was that many children lost out on meaningful time with their fathers. Some children were placed with mothers who may have been unfit, or unable to provide the care the child needed. The approach was often discriminatory.

In New Jersey, custody is first and foremost decided by considering what is in the best interest of the child. The best interest analysis is very detailed and considers things such as the child’s needs, home stability, history of domestic violence, the fitness of the parents, how much time the parents each spent with the child previously, and much more.  Additionally, under the current statute, parents are initially viewed as being on equal footing at the outset of the custody proceeding.  In fact, the trend in the State of New Jersey in recent years has been exactly that- a move towards expanded parenting time for the parent of alternate residence.

This is true even in cases where the child in question is very young.  In January 2017 the Appellate Division upheld a trial court’s decision that the parents of an 11 month old should share 50/50 custody in the unreported case Fisher v. Szczygloski.  The court considered the stability of the parties and the fact that they had lived together for the first 4 months of the child’s life.  The judge also addressed the fact that the mother continued to breastfeed the child.  He did not believe this should outweigh the father’s right to time with his son.  The trial court decided that the parents were both fit and that both parents should be entitled to equal time with the child during what he termed the formative bonding years.  The Appellate Division agreed with the trial court’s analysis.

Due to this trend away from the tender years doctrine, more and more parents are entering into agreements wherein they share custody of the children.  This does not always mean that the parents are agreeing to 50/50 schedules, which generally are only truly workable if the circumstances support it.  For example, it often requires that the parties live close to one another and are able to communicate and cooperate with one another.  However, given this trend, the old “standard” parenting time schedule of alternating weekends with Dad is more or less a plan of the past.  Even if a case proceeds to trial, if the party fighting an expanded schedule cannot demonstrate that the other parent is unfit to have additional parenting time, it is unlikely a trial court judge will restrict that party’s time to such a limited period.

There is no automatic right to custody for either parent, and the court must hear evidence about each parent before deciding a custody case. Both parents have equal rights to seek custody, even sole custody, of their child.  The attorneys at DeTorres & DeGeorge have years of experience in resolving custody disputes, whether by settlement or proceeding to trial.  If you have questions or concerns regarding custody and parenting time with your children, call us today at 908-284-6005 or 973-264-4100.