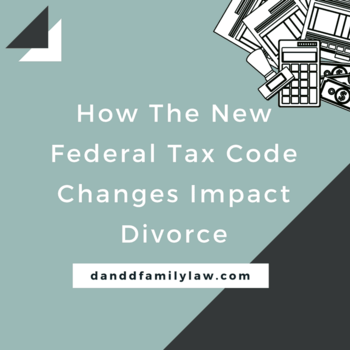 The implications of last month’s federal tax reforms are so vast that just about everyone will be impacted – including, most notably, individuals going through a divorce. The U.S. Congress passed a sweeping series of reforms that affect both individual and corporate tax rates; but perhaps the most important change is how alimony is treated.
Prior to this income tax revision, alimony payments were deductible by the payor, and claimed as income by the recipient. When negotiating alimony, attorneys typically spoke in terms of “gross,” or pre-tax, dollars; and our courts would generally decide an alimony issue in terms of gross dollars as well.

In the above scenario, the parties have a $60,000 difference in their respective incomes. Although not officially approved of by the courts, a “ballpark” estimate of the final alimony obligation would usually be one-third (1/3) of the difference in incomes. This is called New Jersey’s “Rule of Thumb.”

Legislators noted that a “shift” in gross incomes (like the above scenario) reduced federal tax revenue since, as the example illustrates, the $20,000 paid in alimony would be taxed at a lower overall rate. In other words, it would be taxed according to the recipient’s effective tax rate rather than the payor’s effective tax rate. In what appears to be an effort to mitigate the loss of tax revenue under the revised tax code, Congress has done away with the payor’s ability to deduct alimony payments from gross income.

According to the new tax law, for any divorce or separation agreement or order executed after December 31, 2018, alimony payments will no longer be deducted from the payor’s gross income, nor will they be claimed as income by the recipient. Although the original version of the bill in Congress made this change effective after December 31, 2017, the final version of the bill contained a modification of the effective date.

Moreover, it is important to note that the new tax law changes are not retroactive. Alimony agreements and orders that are already in existence, as well as new ones that will be executed before December 31, 2018, are not affected by the new tax law. Also “grandfathered” in this way are any modifications to alimony agreements or orders in place before December 31, 2018 (unless they specifically provide that the new law applies). So how will alimony be determined after December 31, 2018? Clearly, the “Rule of Thumb” method of calculating alimony using gross, pre-tax, dollars will no longer work. Fortunately, though, the existing alimony statute and the numerous factors outlined therein will still work. Practically speaking, however, there is likely to be a renewed focus on the financially dependent spouse’s budget – or in other words, their “needs.”

Our existing Case Information Statement form requires delineation of these expenses in after-tax dollars; so it appears likely that the debate over how much alimony is needed will shift over to the expense sections (Schedules A, B, and C), rather than the current focus on the income sections.

As a result of the revocation of the alimony deduction, the method by which child support is calculated may also change. The New Jersey Child Support Guidelines adjust the amount of child support to account for alimony and its tax impact. But because there will no longer be a tax impact, the parties’ respective incomes must be adjusted before the computer makes it calculations.

How this adjustment is done can make a significant difference in determining the total amount of child support paid.  Calculated in the traditional way, in addition to the $20,000 in alimony, the payor is also paying $9,360 per year in child support for a total support obligation of $29,360.  If we use the alternate, less known method of including the soon-to-be non-deductible money in the child support guideline as non-taxable income in the recipient’s column, it could result in an overall support obligation of only $25,672.

So why do we need to revise how we calculate child support if the new tax law only affects alimony? The answer is that alimony and child support are closely related. Child support cannot be calculated until it is determined what the alimony will be. The current version of the Child Support Guidelines program simply does not allow for a deduction of non-taxable support payments from a payor’s gross taxable income.

Using our earlier example, this could result in our payor paying $26,868 per year instead of $25,672 and being responsible for an erroneously high percentage of additional child-related expenses to boot.

It is therefore very important for every person considering or going through a divorce to know that if they are divorced after December 31, 2018, any alimony paid will be non-taxable and non-deductible. Moreover, thanks to the revision to the tax code, gone are the days of the “Rule of Thumb” method for calculating alimony. A new method of calculating alimony – and child support – must emerge.

Caitlin DeGuilo Toker
Caitlin DeGuilo Toker joined DeTorres and DeGeorge as an associate attorney in June 2014 and was named a partner of the firm in May 2019.Prior to joining the firm, Caitlin was associated with law firms specializing in the practice of family ...
Read more ›