WHO CLAIMS DEPENDENTS AFTER A DIVORCE

Home » WHO CLAIMS DEPENDENTS AFTER A DIVORCE

WHO CLAIMS DEPENDENTS AFTER A DIVORCE 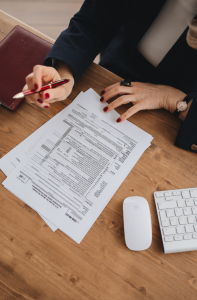 Sharing the tax deductions for children is just one example of co-parenting that will continue between you and your spouse following your divorce. Not unlike addressing governmental benefits such as stimulus checks, which were distributed to families during the Covid-19 pandemic, dealing with tax benefits and sharing in the tax deductions is necessary for parents to address and agree upon both during and just as importantly, following the divorce.

Claiming dependents after divorce will depend on whether there is a settlement agreement between the parties.  The agreement only outlines what you and your spouse have agreed as to claiming the dependent deduction annually on your respective income tax returns.  How the IRS determines dependent deductions should be treated may be different than what you and your spouse agree upon. In some situations, the custodial parent may need to sign a waiver form. Who can claim dependents after a divorce is ultimately controlled by the IRS, so it is necessary to understand how certain life events will be treated for tax purposes.

Sometimes people are not in agreement about who can claim the dependents after a divorce. In those situations the Court may be asked to make the decision. If both parents meet the criteria for claiming a child as a dependency deduction, the Court will generally allow the parties to alternate claiming the child or children as an exemption.  Other factors such as payment of child support and maintenance of expenses for the children may be considered by the Court if the Court is being asked to determine which parent should be entitled to take the deduction.

Who claims dependents after divorce will be outlined in an agreement. When determining who should claim the deduction, the parties must be legally divorced and living separately.  Generally, If there is only one child, that one child will be alternated annually between the parents.  If there are two children, each parent will take one child as a deduction annually. If there are three children, each parent will claim one child annually and alternate claiming the third child.

If both parties are not remarried, generally the parents designated as the primary custodian for the children will be considered head of household following divorce and the other parents will file as a single tax filing status. A tax payer’s marital status is determined by the status of the person on December 31 of the filing year.

Contact our legal team at DeTorres & DeGeorge to address all of your legal needs concerning rules for divorced parents.  Navigating divorce rules for parents can be difficult. Here at DeTorres & DeGeorge we will answer all of your questions and ensure that you have the information you need as you move forward after your divorce and help you to determine who can claim dependents after divorce.